On October 27, 2017, at approximately 12:30 hrs, Off Duty Correction Officer Jason Grasso from Green Haven CF, was on Main Street in Beacon when he observed a disturbance happening behind the Beacon Post Office.  He then saw several subjects chasing another subject towards his direction.  Officer Grasso observed that one of the subjects was his barber, who yelled to him that the person that they were chasing had a gun and tried to rob the barbershop.  Officer Grasso then stepped into the road as the group was approaching and engaged the suspect, stating to him that he was an off-duty Peace Officer and to show him his hands.  The suspect refused that direction and Officer Grasso drew his personal firearm.  He again ordered the suspect to show his hands to which he complied.  Officer Grasso then ordered the suspect to the ground and held the suspect there until police arrived.  A Kimber 9mm firearm, that was believed to be used by the suspect during the crime, was found near the scene. 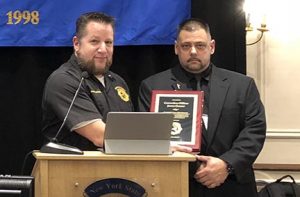