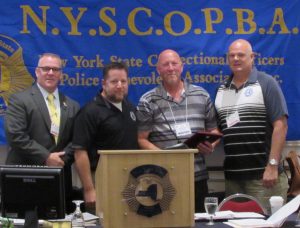 On January 25, 2017, Correction Officer Gilbert Wilson from Green Haven Correctional Facility was aboard JetBlue Flight #548 from Tampa Florida to White Plains NY.  While the plane was in flight, an emotionally disturbed passenger got up from her seat and attempted to open the main cabin door.  She was quickly subdued by another passenger.  The flight crew publicly announced that they needed an able-bodied passenger to help and Officer Wilson answered the call immediately.   Officer Wilson agreed to sit with the emotionally disturbed passenger and kept her restrained so that she would not harm herself or others.  He also employed outstanding communication skills which kept the passenger calm.  Once on the ground, after the flight had declared an emergency and diverted to Jacksonville Florida, Officer Wilson was the consummate professional with Airport Police and the FBI.  He gave a very clear picture of what had occurred to FBI Special Agent Silverstein and other investigating agents.  His actions were swift and helped de-escalate a potentially hazardous situation.

The above situation was reported to DOCCS by FBI Special Agent Alex Silverstein.  Officer Wilson has performed above and beyond his call of duty and is therefore recommended to receive the NYSCOPBA Valor Award.