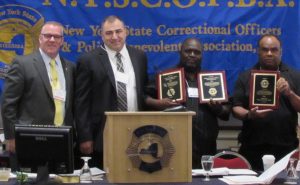 Creedmoor Safety Officers Respond to Two Emergencies
Officers Free Trapped Driver and Perform CPR on Choking Patient
Queens Village, NY – Two Safety and Security Officers, who work at Creedmoor Psychiatric
Center, are credited with freeing a driver trapped inside a vehicle that hit a fire hydrant and
flipped over several times this week.

The accident occurred on Tuesday, February 21, at approximately 6:40 PM. Officers James
Robinson and Eric Harris were on patrol in their vehicle near Hillside Avenue and Winchester
Boulevard when they observed a vehicle hit a fire hydrant on Hillside Avenue and flip multiple
times. Both officers ran to the car and realized the driver was trapped inside. They opened the
door and cut the seat belt, which was holding the driver inside the car. The officers pulled the
driver to safety as NYPD officers arrived on the scene.

The driver, who was conscious, was transported by Emergency Medical Services Units to Long
Island Jewish Hospital for treatment.

The following day, Safety Security Officer Robinson was on mobile patrol at approximately 5:20
PM when he stopped at a deli located right outside of the psychiatric center. While he was in
the deli an outpatient resident walked in and was choking. The patient stumbled backwards
and fell to the floor. The store manager noticed the patient fall and wasn’t breathing. He informed Officer Robinson of what was happening. Officer Robinson immediately began CPR on the patient. After several seconds, the patient began to cough and breath again.

Emergency Medical Services Units were called to the scene and transported the patient to
Long Island Jewish Hospital.

“I would like to commend both Officers Robinson and Harris for their quick and alert actions
this week during two emergencies that occurred outside of Creedmoor Psychiatric
Center. Officer Robinson and Harris responded quickly to a serious car accident outside the
facility and were able to free the trapped driver and pull the individual to safety before NYPD
and medical units arrived. The following day Officer Robinson is credited with performing CPR
on a patient who had choked and stopped breathing. His quick actions and training saved the
life of that individual. Both officers are a credit to their profession and exemplify the
professionalism of our NYSCOPBA members that far too often goes unnoticed”, stated John
Harmon, Law Enforcement Vice President.