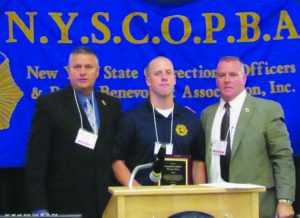 On Monday, May 16, 2016 at approx. 3:15pm, CO Tommy Brice from Orleans CF, was pumping gas at Crosby’s gas station in Albion.  At this time he observed a female, age 16, walking past a Rite Aid towards a motel as an older man approached her and appeared to start asking her questions.  The girls attempted to walk faster, almost appeared to be running away from the man, whom eventually managed to get in front of her.  It was later discovered this man had asked her to come home with him.  Sensing something wasn’t right, CO Brice drove over the the situation and asked the girl if anything was wrong, which she turned to CO Brice and started to cry.  He immediately knew something was wrong and called the police and followed the suspicious man back to his room at the motel until police arrived.  Subsequently, the police entered this man’s room and found 4 knives on the bed.  The suspect stated to the police that his intent was to abduct the girl.

Amy Freeman, the mother of the 16 year old girl, is extremely grateful for Tommy’s actions.  His quick thinking and bravery most likely saved the life of this young girl.  These actions display honor and the true meaning of being a peace officer, and that his tour doesn’t end when he punches out at 3pm.