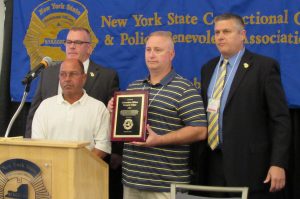 On November 14, 2016 at approximately 8:10 a.m., Correction Officer Gregory Edgar was walking across the second floor parking garage walkway to report for his tour of duty in the DOCCS Secure medical unit at Upstate Hospital in Syracuse, NY.  As he was walking, he saw a young male yelling and threatening the receptionist at the reception desk.  At this time, Officer Edgar saw the young male pull out a black handled knife and lunge toward the receptionist.  Officer Edgar ran down the stairs and verbally engaged the man and told him to drop the knife and to calm down, asking the man how he could get help for him.  Multiple hospital staff assisted in getting the man to drop the knife on the ground and calming him down, then getting him to set in a wheelchair and be escorted to the E.R. for further medical attention.

Correction Officer Edgar went above and beyond his tour of duty.