518.427.1551 nyscopba@nyscopba.org
Two off-duty correction officers quickly responded to a woman showing signs of cardiac
arrest during a local high school football game.  On October 13, 2017, Officer Steve Barr (Riverview Correctional Facility) was watching the Ogdensburg Free Academy football game with his brother, Officer Tim Barr (Ogdensburg Correctional Facility). Officer Steve Barr noticed a woman, who was sitting directly in front of him, in distress. He quickly attended to the woman and realized that she was experiencing an apparent cardiac event.  Officer Steve Barr was able to detect a faint pulse, but both officers realized that the woman was not breathing and required life-saving measures. Using their training, Officer Tim Barr administered CPR while Officer Steve Barr retrieved an Automated External Defibrillator (AED). Medical personnel responded to the scene and assumed treatment of the woman. She regained regular breathing and appeared awake and alert while medical personnel readied her for transport to a local hospital.
“I would like to commend both officers for their quick response to the medical emergency that occurred at the local football game in Ogdensburg. Both brothers recognized that the patron was in distress and, without hesitation, used their years of first-response training to assess the medical situation and administer CPR. Their immediate response provided crucial assistance and care until medical personnel arrived. We commend the quick thinking of two of our brothers and hope for a speedy and full recovery after this local football game took a frightening turn.” – John Roberts, NYSCOPBA Northern Region Vice President. 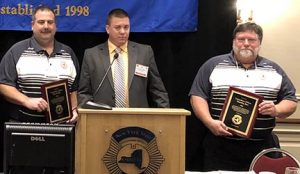